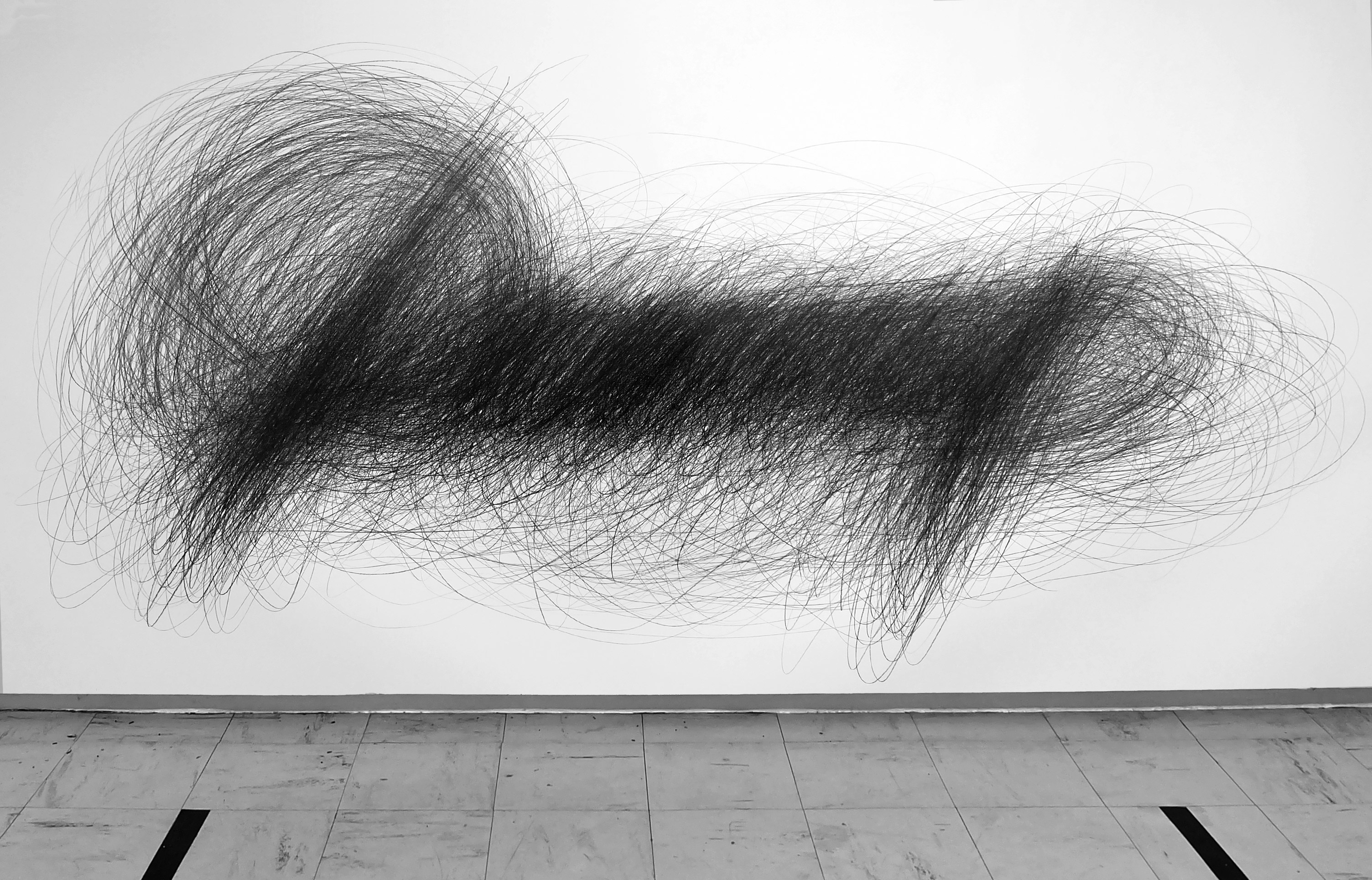 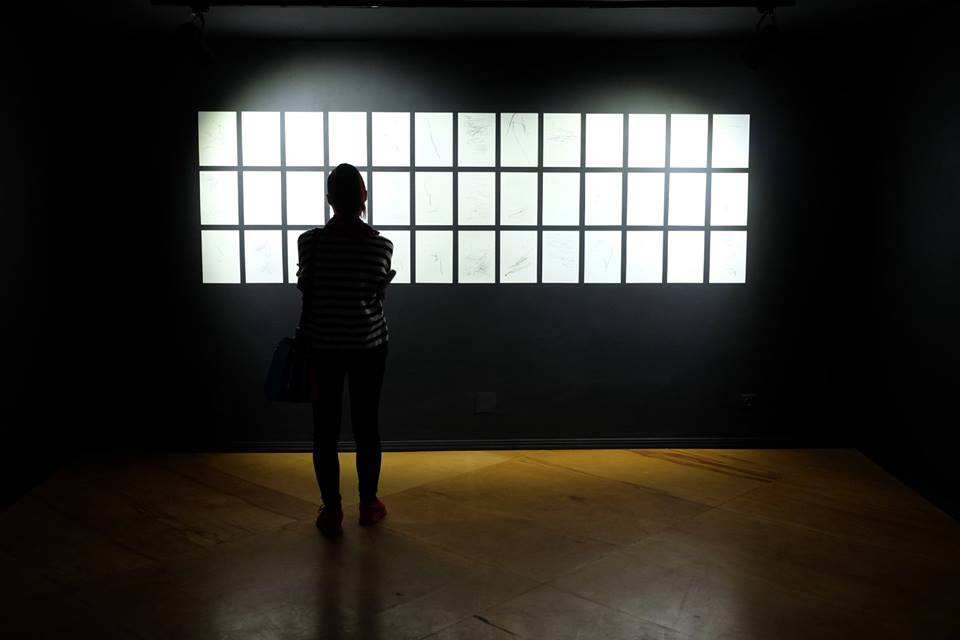 The exhibition of Boryana Petkova and André Serre-Milan is minimalistic – it consists entirely of abstract drawings, sound and documentary materials. It builds upon, or changes the mechanisms of techniques, featuring established functions, which are deemed classical to modern art. Automatic writing, or drawing. Usage of text in the quality of an image. Digital reproduction, reiteration, authorship disclaimer. In all these, there in the center is the artist’s thought, much more than the intuition and feelings, even when it comes to deliberate quitting thoughts. Along with that, however, there is a bright emotional halo hovering above the exhibition – all the artistic experiments are based on a true romantic story dating back to the time of the First World War. As well as on the classic analog painting by hand.
Drawing transmutes into obsession and hard physical labor. The way this sensation to be also experienced by viewers is they to have the opportunity to live it through in a performance. The story of a parted couple is recreated in the form of two separate drawings. The one, created by Boryana Petkova for about two days, is hung on a wall in one of the ateliers of Cité Internationale des Arts in Paris. Its digital copy is projected on a wall in Contemporary Space, Varna. On the adjacent wall, before, during and after the exhibition opening, the making of the other drawing is proceeding. The goal is the drawing to gradually emerge and that many people participate in its creation: first, the instructed curator, and then the audience. It’s no accident the drawings are made straight on the walls. It is important for the authors that the drawings should not have a frame and that they do not exist for a long time, in some sense to flow out as a sound of certain duration. This is supplemented by authorship disclaimer. The process of drawing in Varna is not controlled and there are only simple guidelines. The result is an “original” drawing, a one and only copy that cannot be printed out in multiple print runs and is made by hand – it has all the signs of the classic drawing and all the features of the classic performance. But the most important thing about each drawing, and about the performance, is what it actually depicts. The drawings in Paris and in Varna look like abstractions, but they are not – they represent the overlaid names “Stoyan” and “Siyka”, written out hundreds of times.
The letters, exchanged between Anastasia Tabakova (a teacher in the village of Mihaltsi) and Stoyan Georgiev Hadzhiev (a soldier in the 29th Yambol Regiment), are kept in the Gorna Oryahovitsa Historical Museum. While separated because of the war, they exchanged about a thousand letters and postcards, from 1914 to 1920, when Stoyan returned to Gorna Oryahovitsa. Their correspondence is the starting visual material for today’s art project and part of it is present in the exhibition as documentation. For Boryana Petkova and André Serre-Milan the specific content of the letters is not so much important but rather the systematic maintenance of the connection, even if one is not aware whether the other one would send a reply, where he is, and even whether he is alive. Importance is laid on the study of the mechanics of movement and the resulting sound, on the similarity between writing and drawing. They recognize the hand-written text as a drawing and deal with it taking namely that perspective. From the point of view of art, these abstract drawings represent an analysis of the question whether a work of art can be both concrete and abstract. This writing-drawing is mechanical process, but the action goes along with the experiencing of emotions. Such complex conclusions have been reached following multiple experiments with automatic drawing, in parallel with reading of the letters and recording of the sound.
The exhibition also includes part of the many drawings resulting from this experiment. The work, which has an even higher status, is the sound composed by André Serre-Milan.  Portraying a written text in terms of sound is a powerful affecting element. The sound record is edited and processed digitally so that the listener can hear writing, drawing or breathing, without clearly distinguishing the different actions.
In an era, in which a digitally reproducible image has long assumed a fully artistic status, more and more artists rethink the analog means of expression and the (viewer’s) personal interference they allow. Whether participating with his/her own emotions or experiencing the story of Siyka and Stoyan, the spectator is involved in the artwork physically and mentally.
Daniela Radeva
curator 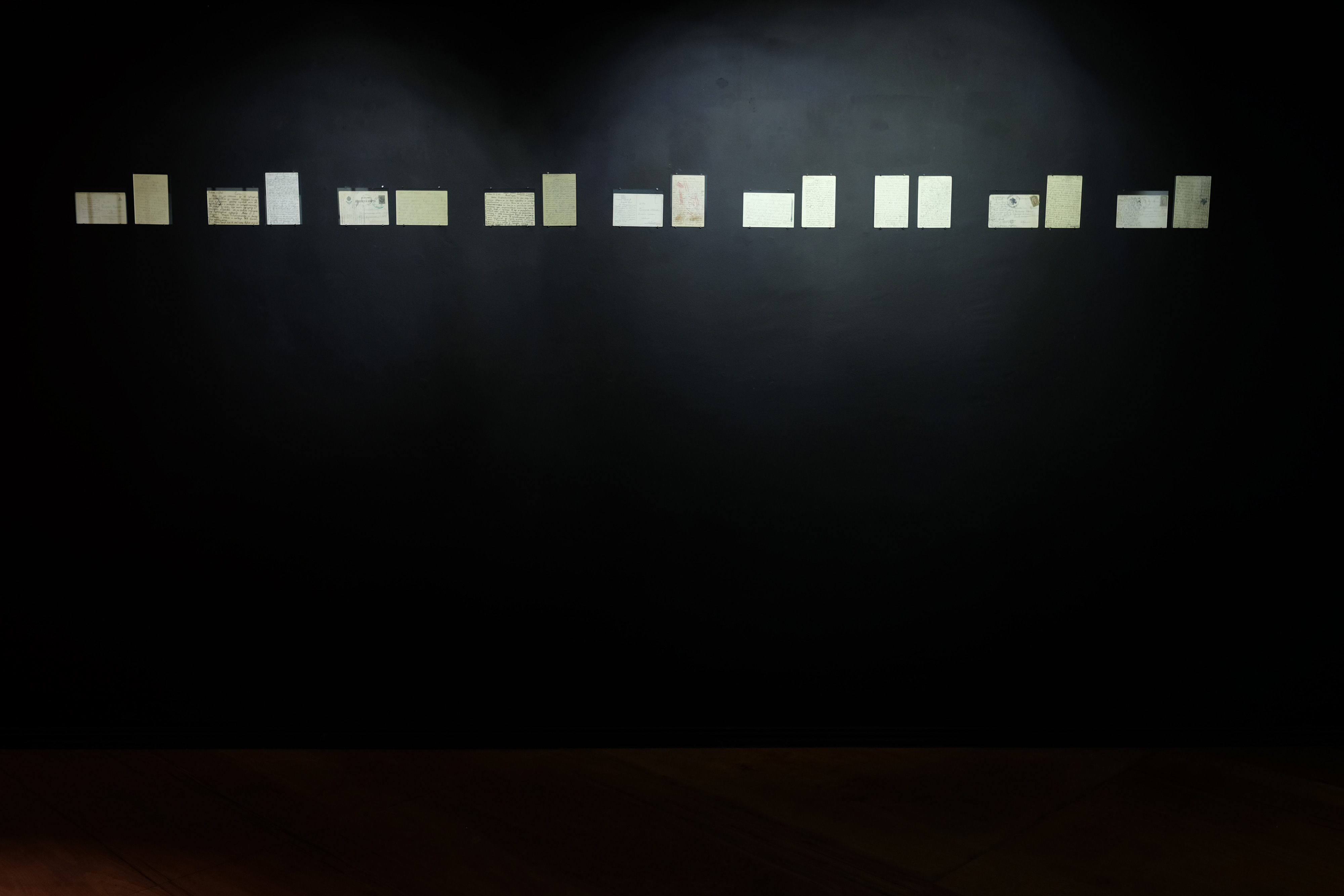