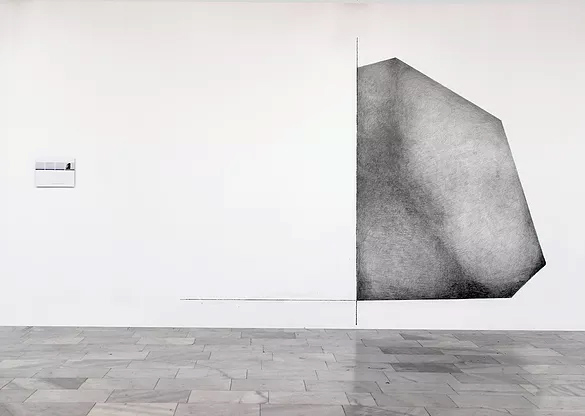 In Echoes, Boryana Petkova discusses the existence of the image through a two-part drawing process of one image on two walls situated in the territories of different countries presented at one and the same time to the audience of Paris and Sofia. The image is a stone found in Bulgaria where the author was born and lived most of her life. In the project concept, Boryana stresses that the missing half of each drawing is active, whereby she regulates the dynamics and parameters of its effect in the architectural environment of two European capitals.
According to the French theorist, architect and designer, Bernard Cache, architecture is a process of designing frames in every dimension: plans, sections and elevations. Walls separate and isolate us from the world, but at the same time create another, structured and framed world. Designed to separate, the wall also provides new connections, new social and interpersonal relationships with the world on the other side. The frame, according Cache, is not a physical fencing of the image, but a body that creates relationships between image, personality, and reality. The drawings, one in the Cité des arts, the other in the Sofia City Gallery, mark autonomous spaces on both walls and are a visual break in the surface integrity that illustrates the notion of the frame and how the image works. Half of the stone – an object with a strong material and symbolic presence in nature and in human practice – appears on the territory of the present life of Boryana Petkova in the Cité des arts, the other half belongs to another space from another territory inhabited in the past. The image cannot be present in its entirety only on the wall of the Cité des arts, because in the perceptions of the personality that make it visible, it exists not only in the physical space but also in the mental space of the memories. In this sense, the framework defines not only the physical perception of the object, but also the way it functions in human perceptions. Therefore, the presentation of the drawings also appears conditional in the concept of a simultaneous act carried out on two geographic territories, since there is a time difference between Paris and Sofia and both events will always follow each other. Likewise, in consequence of noticing an object, unpredictable individual chains of thought are triggered by what is seen, which make us wonder how far our concepts of images, with which we try to reflect on the world that surrounds us, can be universal.
Irina Batkova
Independent curator
Founder of Art Project Depot association